Digital technologies can support efforts to climate change mitigation and adaptation and help to meet the Paris Agreement goals quicker. Rebound effects like emissions from the expanding Information and Communication Technology (ICT) industry need to be addressed with appropriate regulatory instruments.

BRUSSELS - October 26, 2020 - GeSI launched the report “Digital Solutions for Climate Action: using ICT to raise ambitions on climate action in low- and middle-income countries”. The report, published in 2019, was implemented by the Global Enabling Sustainability Initiative (GeSI), facilitated by the Deutsche Gesellschaft für Internationale Zusammenarbeit (GIZ) and supported by Federal Ministry for the Environment, Nature Conservation and Nuclear Safety (BMU).

Since December 2015, 189 Parties of 197 signatories have ratified the Paris Agreement and submitted their National Determined Contributions (NDCs). The Agreement foresees a 5-year review of the NDCs, and 5 years later, what has been effectively done by the Parties is insufficient to meet the pledges. This is the case for many low and middle-income countries which were central in reaching this Agreement as many of them, given their exposure to Climate Change effects, played a crucial role in building the High-Ambition Coalition which led to the success of COP21.

Digital technologies can accelerate the efforts to mitigating and adapting to climate change and to meeting the Paris Agreement goals: the launch event focused on unveiling the potential of the ICT industry tools to contribute to the mitigation and adaptation efforts through solid and evidence-based data.

The Report also presents the inseparable link between the socio-economic development of low and middle-income countries and impactful Climate Action, all enabled by Digital Technologies.

Alongside the illustration of the main findings, the event hosted an exchange between high-level experts coming from the public and private sector and with in-depth knowledge and experience of climate-related issues. The panellists also discussed and shared their expertise on how digital technologies can contribute to the fulfilment of the Paris Agreement climate goals.

BMU, GiZ and GeSI have actively supported and financed the development of the Report and remain fully committed to reaching climate neutrality and protection and driving the overall Sustainability Agenda.

Watch the recording of the report launch below: 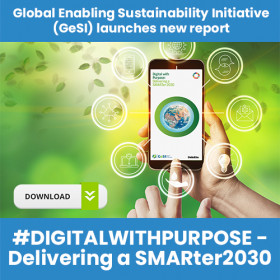